Backward skating is obviously a very important skill to master for Ice Hockey… and that goes for both Defensemen and Forwards.  The skating fundamentals needed to be a better skater when going forward, such as deep knee bend, bodyweight centered over the skates, 100% power on each push, etc., are very much the same when going backwards.

A common myth in hockey is that only Defensemen need to be strong backward skaters.  While it is true that for a lot of the game a Defenseman will skate more backwards than a Forward, it is still vital that Forwards make every attempt to master backward skating techniques.

The speed of the game is such that Forwards are required to make quick change of directions as well as controlled backward to forward moves necessary to stay involved in the play.  Plus, when a Defenseman gets caught up ice, the team depends on the Forward to get back and cover for them, making it very important that they can skate proficiently backwards as well.

When picking up speed while going Backward in a straight line, we like to see players use Backward Crossovers to help them accelerate and generate maximum power right out of the gate.

Once a player gets moving however, we like to see them use the Backward Stride, which will give you better balance and less side to side movement… plus, when used as a Defenseman, it forces the Forward to make the first move.

This technique is often called a C-Cut or Half-Moon Cut… with the optimal word being “cut”, as a player needs to cut through the ice, up and out to the side to generate speed (it looks like a “C” or “Half-Moon” in the ice).

The following is a checklist to improve the Backward Skating Stride (C-Cuts) and Backward Crossovers… These techniques should be practiced while going from goal line to goal line (understanding that in a game a player will almost never go from one end to the other backwards, however it gives players plenty of room to practice their technique):

There are three main parts to the Backward Stride: 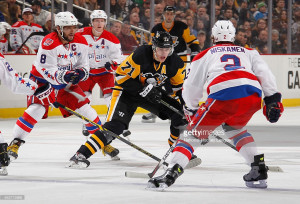 Skating Imagery for the Backward Stride:

When skating backward your body posture and positioning are extremely important.  You should feel like you are sitting on a stool with your backside almost parallel to the ice, keeping your back straight and your weight centered directly over the middle of your skates.  Positioning your upper body and chest too far forward when going backward will put too much weight to the front part of the skate and definitely take away from your balance, speed and power. 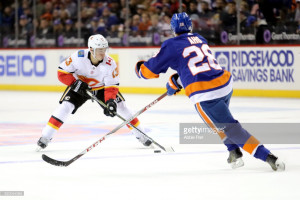 There are three main parts to the Backward Lateral Crossover:

Try to picture this maneuver more as a Crossunder rather than as a Crossover, by keeping both skates on the ice (not kicking over with the outside leg), with that inside leg pulling under to gain speed.  I like to have my students make believe they are playing “tug-of-war” with their inside leg.  In other words, try to pull against the ice as much as possible until you have fully stretched the inside leg, in effect, “tugging” against the ice.