Whenever we watch a great NHL game, it always makes us realize how important Transition Moves are in Hockey. One common myth is that only Defenseman have to be proficient in all transition moves, but you only have to Connor McDavid or Mathew Barzal go from backward to forward to score a goal to realize that is a fallacy. The great skating forwards have the ability to transition from backward skating to forward, and are able to do so while still getting all their weight centered over their skates in order to drive down and into a slap shot (which they often blast directly off a pass). This is just one excellent example of how a transition move can help you during a game. In this month’s article we will discuss the techniques and fundamentals for transition moves.

Picture the fact that when you are facing one direction, that you obviously have to make a 360° turn to get all the way around to that original position. With that in mind your first and only pivot should be ° of that (90°). It is vital that you make your turns as direct as possible. Too many players, professionals included, first turn their skates 90° in the wrong direction and then have to swing the hips a full 180* just to get going in the correct direction. This is a totally wasted movement which will decrease the directness, balance and speed of your turns. 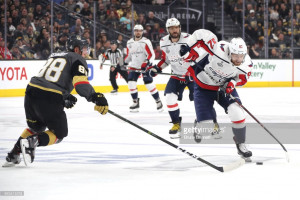 Try to picture this maneuver as a °-turn. This is because if you let your hips turn too far, for example ° ot the way around, this will really slow you down and you will not be able to make a quick start forward. Plus, you are not facing the play anymore. Likewise, I see many players who make the mistake of jumping off of the inside edge (the pushing/turning foot) too soon, before it pulls your hips around. Making this error will cause you to lose all your momentum because you will have to put the other skate on the ice and you still are not facing in the direction that you need to go.